Skip to content
Tom and Becky Spencer‘s summer wedding at Wick Farm was full of homemade touches. We are excited to bring you lots of lovely photos and the story of their beautiful day, which featured in the West Weddings autumn 2014 issue. 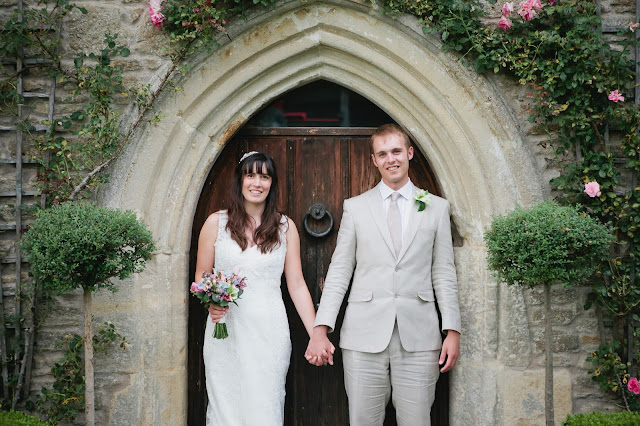 There aren’t many people who can say they’ve slept in their husband’s bed before they’ve even met him, but due to having a university friend in common, Becky often stayed the night in future partner Tom’s room while he was away – which would have been a fantastic icebreaker when the pair finally did meet! 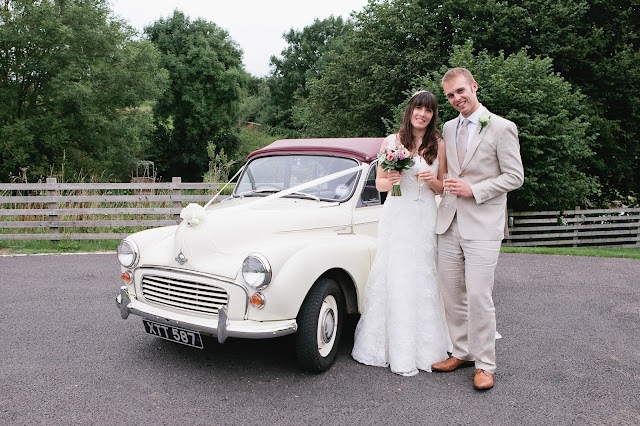 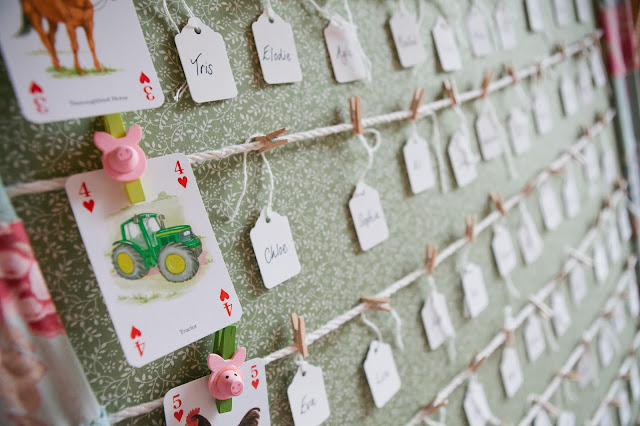 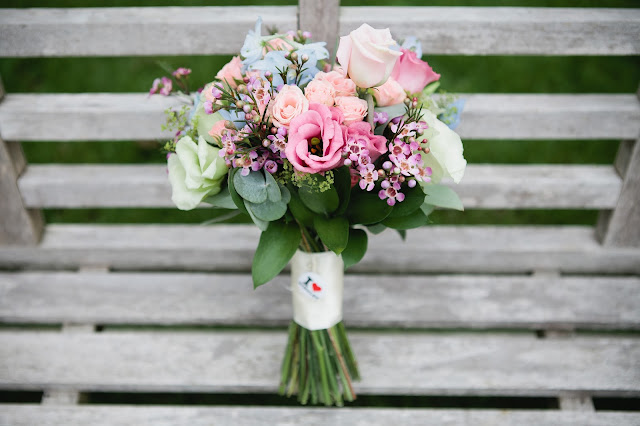 Due to a deliberately off-putting conversation Tom initiated with Becky, she thought he didn’t want to get married, so his proposal on a bridge over the River Cam after six years together did come as somewhat of a surprise. “It felt like being hit by a bus – in a nice way, though!” In fact, Tom has been thinking about his proposal for months, and had even commissioned a special ring from a Bristol jewellers. “It was a very unusual design and although I feel bad about it now, the first thing I said was ‘Are you joking?’ as it didn’t look like a traditional engagement ring, so I thought it might be plastic and that Tom was just messing around!” It didn’t take Tom long to persuade Becky of his seriousness, however. “It was very heartfelt and special,” says Becky. 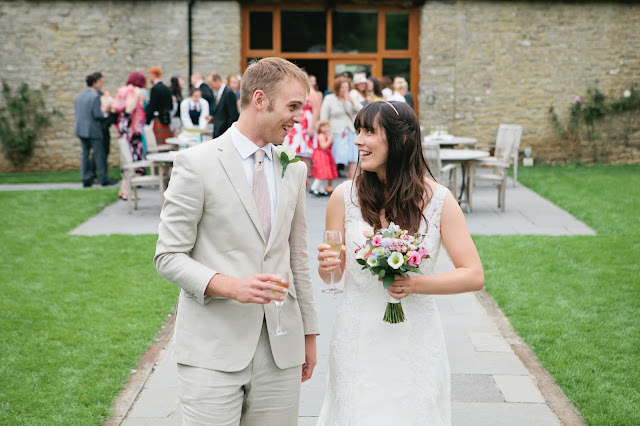 After attending a wedding in a barn, which featured a barn dance in the evening, Becky and Tom wanted the same for their nuptials, so picked Wick Farm near Bath for both their ceremony and reception. “It was very well designed and decorated, and had the warm welcoming feeling we were looking for,” explains Becky. “Location was also important, as a lot of our friends live in Bristol and Bath so we didn’t want it to be too much hassle for people to get there.” Having a relaxed day was important for the couple, too. “Tom and I are both quite laid back and happy people and I wanted our wedding to reflect this, so everyone felt relaxed and comfortable and was able to enjoy the happiness of the day.” 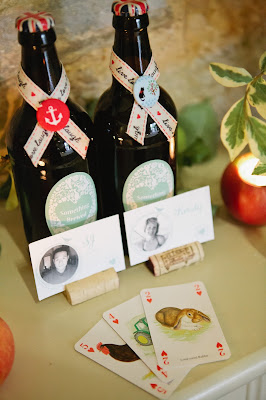 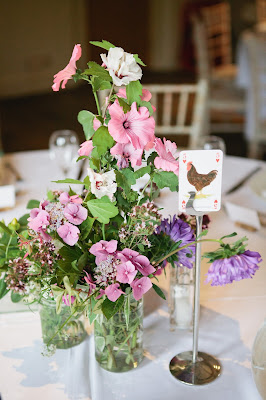 The day was beautifully captured by Bristol-based photographer Kirsty Field. “Her photography was amazing – we’re so happy with our wedding shots,” says Tom. “She’s very relaxed, and focuses on natural shots, which we really like. She also took us out for a pre-wedding photoshoot around Bristol, which was a fantastic experience, as it got us used to her shooting style and made us more relaxed in front of the camera, which was great for the big day.”  Despite the rest of the UK being treated to heavy rain, the skies stayed dry over Wick Farm, and the sunshine even came out for the evening photos. 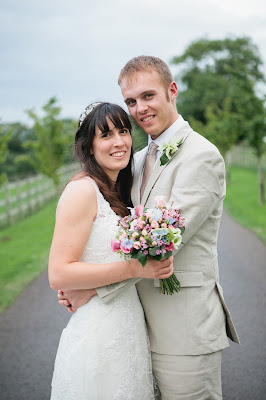 The handmade touch was evident throughout this wedding. Graphic designer Becky produced all the wedding stationery herself, including personalised placecards with individual photos on them (“Thank goodness for Facebook!”). The tiers of the cake were each made by a different family member, topped with a Fimo model made by Becky, and Becky walked up the aisle to her brother-in-law playing the piano. The wine was brought over from France by Becky’s parents, who have a holiday home there. “We also handed out home-brewed beer as a favour to each guest,” says Tom. “We didn’t really know what strength the beer was, but later in the evening we deduced it must have been quite strong, due to the antics of some of the guests!” And as a homage to  loved ones who couldn’t be there, the couple displayed framed photos of their grandparents, plus their parents, on their own wedding days. 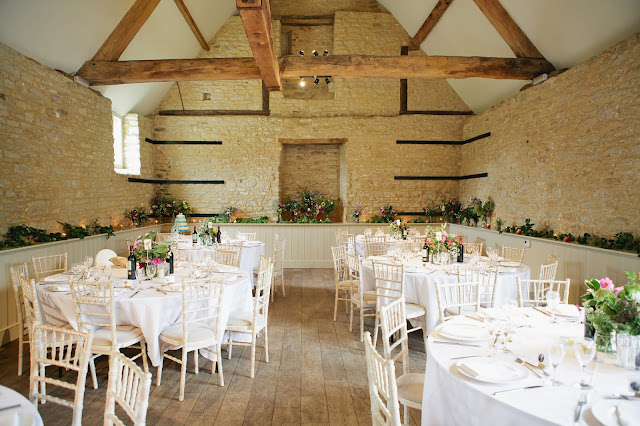 The couple had also planned to decorate the venue with homegrown flowers, but things didn’t go quite to plan, thanks to some plant-munching bugs. “Despite daily slug collections, lots of the flowers we grew ourselves didn’t make it,” explains Tom. “Luckily, when Becky told her boss Claire about the troubles we were having with the flowers, she and her husband Bill came to the rescue. They arrived early in the morning with half of their garden and proceeded to decorate the whole venue.” “They are both such lovely people and it made it feel really special to know they had made all that effort just for us,” adds Becky. 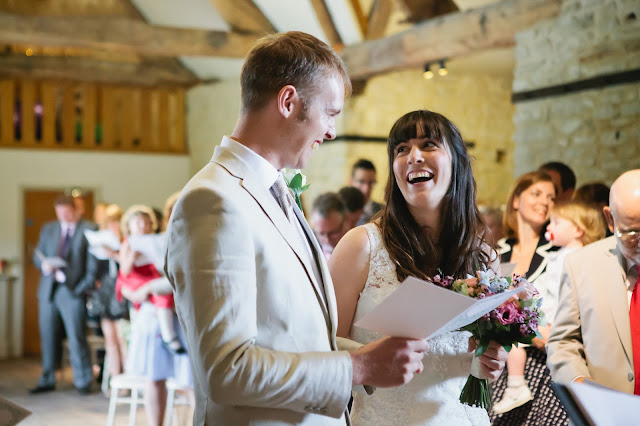 Becky didn’t want to miss out on singing during their civil ceremony, so guests were asked to sing ‘Can’t Take My Eye Of You’ by Frankie Valli during the ceremony. “We picked it together as it is a upbeat, fun song that sums up how we feel about each other. In our order of service I asked everyone to sing as loudly as they could. I was a bit nervous about how it would go but it worked really well and everyone got really into it – it was one of my favourite and funniest bits of our wedding!” she says. 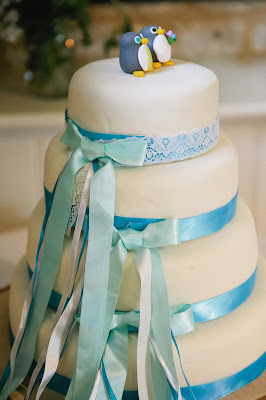 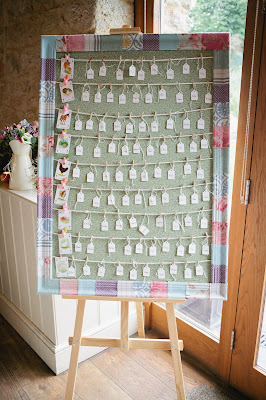 The evening barn dance was a huge success with guests. “We knew a barn dance is one thing guaranteed to get everybody up and dancing! Add in the excellent food, wine, home brew and cake and we reckon people really enjoyed themselves. In fact, we’ve heard from quite a few of our guests that it was the best wedding they have ever been to, which is lovely.” 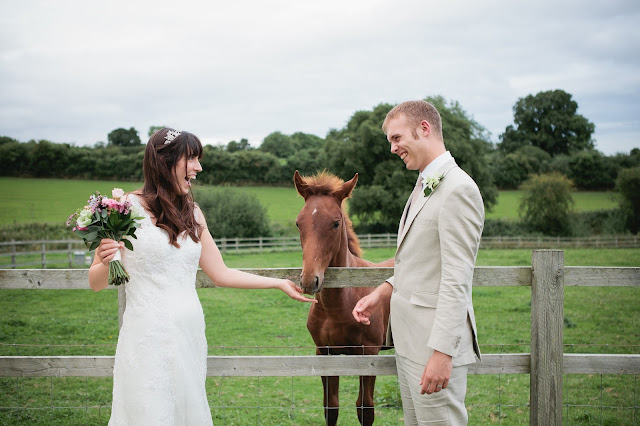