Skip to content
Clearly, West Weddings has a hotline to McQueen. On Thursday we Tweeted that our prediction for the dress was “v neck, lace sleeves, tiara, slightly A line, veil that forms part of train”. Well, four out five ain’t bad.
Sarah Burton did us proud. The dress, with its lace bodice and applique skirt, was a beautiful creation involving British craftmanship at its best with all the materials, including the lace,  sourced from British factories. As Kate stepped out of the Rolls Royce, the world gave it a massive thumbs up. 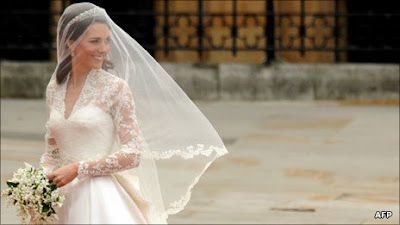 via the BBC
According to the BBC, a team of 30 embroiderers at the Royal School of Needlecraft worked for weeks on the delicate detailing on the bodice and skirt. These included a rose, shamrock, thistle and daffodil to represent the four nations of the United Kingdom. Embroiderers washed their hands every half an hour to ensure the thread stayed clean and the needles were also changed every three hours to keep them sharp.

Unlike other brides, Kate was somewhat bound by Royal protocol for what she could wear: the strapless dress that is so favoured by British brides today, for example, would not have been an option for a religious ceremony in Westminster Abbey attended by the Queen. Kate’s dress sense has been criticised in the past for being too frumpy and “safe”, and so the choice of McQueen to design her wedding dress was not necessarily what everyone would have predicted. But the collaboration worked: the simplicity of the dress allowed Kate’s best features (her hair, her figure) to be framed to perfection, and the 2.7m train was dramatic enough to work in a venue the size of the Abbey whilst not overwhelming the bride.
Overall, the dress was a success because it is timeless and classic: you can imagine it looking as good in twenty years’ time as it did last Friday, something which can’t really be said for Diana’s very of-its-era creation. Kate’s dress was compared with Grace Kelly’s gown for her 1956 marriage to Prince Ranier. Since Grace is the epitome of style and  elegance, and a fellow princess, I think the now Duchess of Cambridge would be pleased with this comparison.
Sarah Burton was also responsible for the dress worn by the Maid of Honour, Pippa Middleton, which instantly catapulted her into the global spotlight. Pippa’s cowl necked, ivory crepe gown  trimmed with the same lace from the bride’s dress showed off her enviable figure and instantly gave her a new nickname of “Your Royal Hotness”. Never mind a bridesmaid dress, I know lots of people who would gladly wear that dress to get married in! In fact, I thought that perhaps Pippa’s dress was what Kate would have chosen for herself if she had been a Bucklebury bride instead of a Royal one. 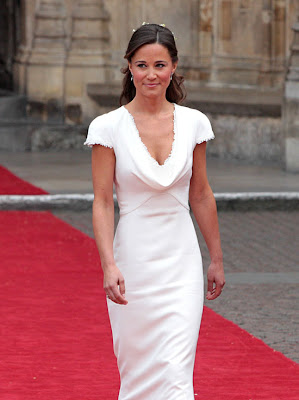 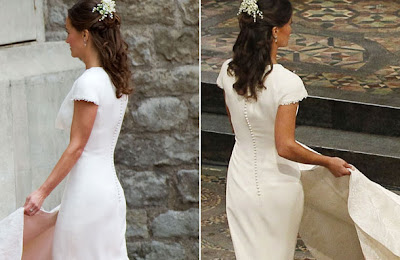 Picture via the Mirror
Although lots of people have been commenting on it being bad etiquette for the bridesmaid to be in the same colour as the bride, traditionally bridesmaids used to wear the same colour, to trick the devil so he wouldn’t know which woman was the bride and steal her away.  When white dresses became fashionable for brides, bridesmaids also started wearing white. Fashion then changed to bridesmaids wearing coloured dresses in order for the bride to stand out, but we’ve been seeing white/ivory creep back in over recent years and I think the Royal stamp of approval will give this trend a further push.
Kate’s evening dress was another McQueen creation, a strapless white gazar mid length dress with diamante detail, worn with a white bolero. I think it’s great how the couple had the formal ceremony expected of a Royal couple in the morning, but then were able to have a much more relaxed evening reception that seemed to be a reflection of how they would have done things if not bound by the fact it was a Royal Wedding. 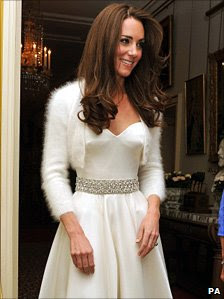 So what happens to the dresses now? Well, Kate is apparently considering several options as to what to do with the main wedding dress: there has been talk of it being auctioned for charity and also going on public display so people can appreciate up close the beautiful workmanship involved. And as mentioned before, expect the copies to start hitting the bridal shops next season –  in fact, someone’s already done it!
– Helen

One thought on “West Weddings on the Royal Wedding: the dress”