Skip to content
When a woman gets engaged, you can pretty much guarantee that, after the initial questions about the ring, the next question will be “so, what will you wear?” For many, the wedding dress is regarded as the most important item a woman will ever be seen in, and the outfit that will define the day. It will look out at you from the photographs, it will be remembered by all your guests, it is the dress that makes you feel a million dollars and that you don’t want to take off. In short, it’s pretty special.
To celebrate this (and, as Fashion Museum Manager Rosemary Harden put it, “to jump on the – double – Royal Wedding bandwagon!”), the lovely folks at the Fashion Museum in Bath have put together a new exhibition. Running until January 2012, “What Will She Wear?” is a celebration of the wedding dress, featuring gowns from the 1820s up to the present day.
We were lucky enough to be invited to the launch of the exhibition on 15th February, organised by the team at Bath Historic Buildings and Searcy’s. Not one to turn down an opportunity to look at pretty dresses with a glass of champagne in one hand, we jumped on the train from West Weddings HQ and headed down to Bath.
On our arrival, we met up with the lovely Niki Whittle from Hip Shapes and Bristol Fashion and were given a cup of tea to warm us up, before being shown around the Pump Rooms and the Roman Baths, two of the jewels in Bath’s heritage buildings. If you fancy getting married in a 2000 year old building, the Baths are available for sunrise wedding ceremonies at 8.30am, or if that’s a little early for you, they can be hired for an evening reception. With the steam rising from the 45 degree water, flickering torchlights and the moon shining through the open courtyard, the Baths are incredibly atmospheric and would make a stunning backdrop for photographs. 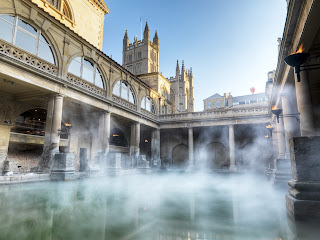 The Baths in the daytime – photo via Bath Historic Buildings 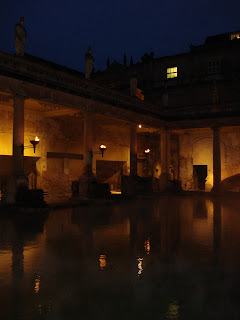 At night, lit by flickering torchlight 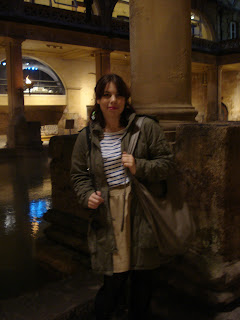 West Weddings’ Hannah enjoying the atmosphere of the Baths
Our next stop was the Assembly Rooms, where the Fashion Museum is based. Built in the eighteenth century, the rooms in the complex – the Great Octagon, the Tea Room, the Card Room and the Ballroom – are instantly recognisable from television and film productions; the Ballroom was recently featured in the Keira Knightley film The Duchess and also hosted the final of The Great British Menu with Prince Charles and Camilla as guests of honour. All of the rooms are available for weddings and receptions, and can be hired in a variety of combinations, depending on the number of guests. 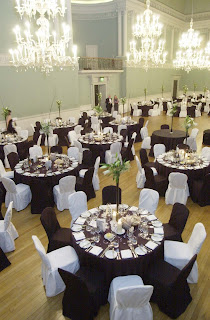 The Ballroom when set up for dinner – photo via Bath Historic Buildings
Tom Deller, Corporate Hospitality Manager for Bath Historic Buildings, gave us a talk about the fascinating history of the Assembly Rooms, including the fact that the Tea Room was used as an aeroplane factory during the Second World War and that the stone in it is now pinky-coloured due to incendiary bombs! With their columns of glittering crystal chandeliers (each worth £1million, as they are the original Georgian constructions – luckily put in storage during the war!), marble pillars and stunning plasterwork, the Assembly Rooms are a must for any bride with a love of Jane Austen and Regency pomp and circumstance. 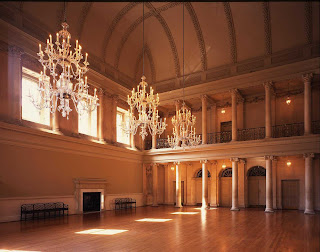 The Tea Rooms with its amazing chandeliers – photo via Bath Historic Buildings
Finally, what we’d all been waiting for, the Fashion Museum. Based downstairs in the Assembly Rooms, the museum is a world-renowned resource for fashion from every era – its oldest piece is a silver tissue dress from 1660 and one of its latest additions is a dress from the 2008 Kate Moss for Topshop collection. As well as its permanent displays, the museum puts a number of special exhibitions each year in order to show the public even more items from its huge archive.
“What Will She Wear?” is not laid out chronologically. This was a deliberate decision, according to Rosemary, enabling visitors to see how styles have been repeated throughout the ages. It’s a good idea; when you see dresses from the last 180 years next to each other, you can see how certain things come up again and again – lace, for example, is something that spans all periods, from delicate veils and trains to sleeves and panel inserts.
To create a harmonious thread and link all the exhibits, the mannequins modelling the dresses are all adorned with handmade flowers and accessories, made by volunteers who meet weekly at the museum and who have been hard at work since November on creating them. What makes them even more special is that they have all been created using everyday household objects; humble items such as tissues and plastic bags have been transformed into delicate floral headpieces and cascading bouquets, which makes for an interesting contrast next to the silks and satins of the dresses. 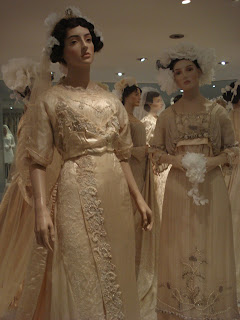 Just two of the beautiful dresses on show in the exhibition
The dresses featured in the exhibition have come from a range of resources – Rosemary said that they are extremely lucky with people donating or loaning items to the museum. Some of the dresses are from celebrity weddings, such as model Lisa Butcher’s white backless Bruce Oldfield dress from her 1992 marriage to Marco Pierre White, and designer dresses, such as an Alexander McQueen design from a society wedding last year. These then stand alongside dresses of more humble origins, most likely handmade by the bride, her mother or a local dressmaker, with the only thing known about them being the bride’s name and the year she got married. As Rosemary commented, it’s lovely to think of the love and thought that was put into each stitch of these handmade creations.
As well as wedding dresses, the exhibition also features a previously unseen gallery of photographs from the museum’s archives that came from the famous French fashion house, Worth. A range of high society brides from the 1930s (including comtesses, duchesses and our favourite, the Queen of Egypt) look out dreamily from sepia photographs taken in a Parisian studio, wearing their haute couture gowns. With flowing veils, elegantly draped trains and bouquets of lilies, the collection provides a fascinating insight into dresses worn by the most fashionable ladies in the early twentieth century. Rosemary has been researching the history of the brides and has come up with some fascinating details; one bride was marrying the “pretender” to the throne of France, and so the wedding was carried out in Sicily as he wasn’t allowed to set foot on French soil!
Whether you’re a bride-to-be, already married or just interested in fashion, we can highly recommend going to see “What Will She Wear?” It’s lovely to be able to see so many wedding dresses in one place, celebrating this most special of outfits. And who knows, one of them could end up being the inspiration for your big day…